Located in the enchanting and unspoilt chain of Bürengiyn Nuruu (Buren Khan), the Amarbayasgalant monastery is aptly named the "Monastery of the calm bliss."

Indeed, the natural environment of this very important monastery had to be conducive to harmony and serenity, and the beauty is still intact today, thanks to its magnificent isolation, and the lack of paved roads to join the monastery.

To reach it, you have to drive through several valleys on 35 km of sometimes difficult tracks. The valley where it is nestled has been carved by a tributary of the Orkhon River, and is crowned by Mount Budlan Uul (1567 m). The Monastery is at the foot of Toylvïn Davaa Pass (1226 m).

The Amarbayasgalant monastery is one of the three largest Buddhist centers in Mongolia. It belongs to the Tibetan Gelugpa school, also called "Yellow Hat school." It was built in the early 18th century to house the remains of Zanabazar, the first Bogd Gegen and is one of the few monasteries to have escaped the destructions of the communist period.

The monastery has remained remarkably preserved, even if the nature sometimes takes a little ease, with few weeds that colonize tiled roofs, which do add charm to the ancient buildings!

Amarbayasgalant's beauty also lies in its greater unity since all the buildings are Manchu style. The different temples are circled by red walls topped with glazed ceramic tiles.

On the hill overlooking the monastery, you can find a large statue and a stupa which reminds irresistibly that of Boudhanath in Kathmandu. 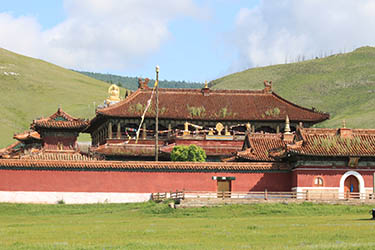 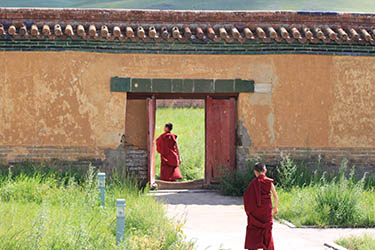 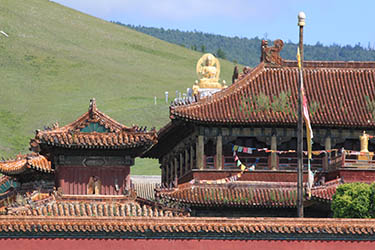 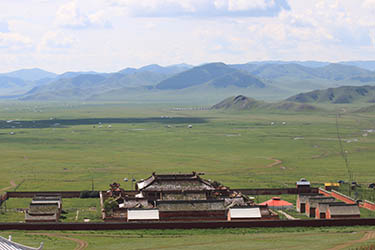 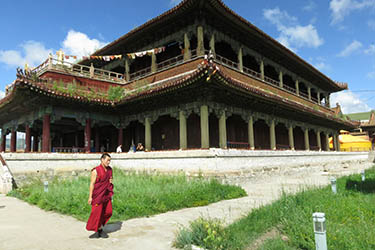